December 2018 Almaden Valley Real Estate Market Update… The Almaden Valley real estate market ended 2018 on a quiet note. Active, pending and sold listings all ended lower than they were in November, which is a pretty typical holiday season feature. The average price per square foot was up over 5% from November, ending the year at $681.

When compared to previous years, we saw some elements of the white-hot Almaden Valley single family home market cool down a bit the last few months of 2018. Months of Inventory available in December 2018 was significantly higher than it has been in recent years, due to an increase in sellers entering the market. When comparing 2018 to years past, we can see that overall inventory often met or exceeded demand, which is a hallmark of a transition to a market where buyers exert more market influence, and sellers compete for buyers rather than vice versa as we’ve seen in the past.

The gradual increase in average price per square foot seems to bear out the gradual cooling, especially when comparing prices from previous Decembers. In December 2017 we were at $671/sqft level. This increased to $681/sqft in December 2018, a rather modest 1.5% increase as compared to the much higher 9.3% increase we saw from December 2016’s $614/sqft level to December 2017.

But, don’t worry, things appear to be picking up these past couple of weeks as we head into the spring selling season. If you’re thinking about getting into the market, send me an email or give me a call! 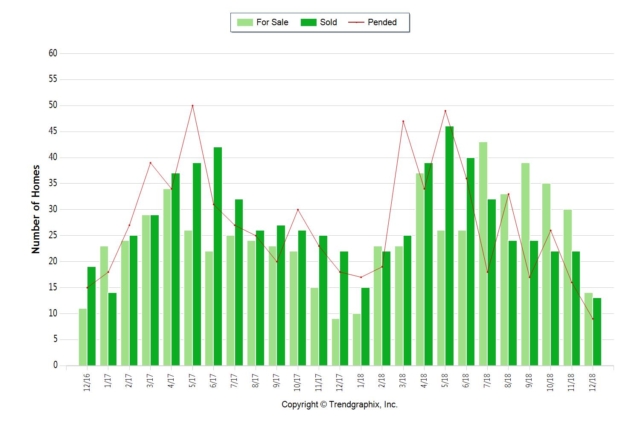