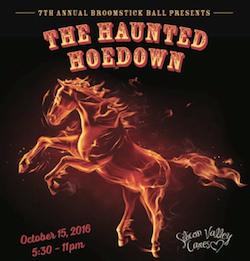 Get ready for a Haunted Hoedown right here in Almaden Valley!

Do you fancy a ride on a haunted horse? For an early Halloween party, head to the Haunted Hoedown on October 15, 2016, at the Santa Clara Horsemen’s Association at 20350 McKean Road, San Jose CA, 95120.

This year, Silicon Valley Cares (SVC), host of the Broomstick Ball Halloween party, is taking the annual event to new heights. At the Haunted Hoedown, costumed guests will be treated to a mechanical bull ride, silent auction, fun games, music and dancing as well as an extravagant dinner spread provided by Justin’s Catering. Tickets cost $130 each and all proceeds will be donated to charity.

The Broomstick Ball Halloween costume party is the culmination of a series of annual fundraising events through the summer and autumn. This year, the fun began with the Texas Hold’em Poker and Bingo tournament in August and, more recently, the Annual Par Tee Classic Golf Tournament at the Cinnabar Hills on September 23rd.

The SVC is an all women volunteer non-profit which donates to beneficiaries like Breakthrough Silicon Valley, a charity for middle school students, the Grateful Garment Project, for victims of sexual attack and the Silicon Valley Pet Project. So what are you waiting for? Bring out those costumes and head to Almaden Valley for a haunted ride of your life. For more information, visit www.siliconvalleycares.org.