Looking at the month-to-month performance, the market was much calmer, though this is to be expected as the market coasts through the holiday cooling cycle that we experience every year. The number of homes offered for sale dropped from 44 in September to 32 in October, while the number that sold dropped from 35 to 25 in the same time period.

Price per square foot retracted from $575 in September to $548 in October. This, too, is not uncommon during the holiday season, as price responds to supply and demand. Since the market is cooling for the holidays, seeing prices reduce is not unexpected.

When we compare price per square foot in October 2016 to October 2015, we can get a firm idea of how the Almaden Valley real estate market has transitioned by one controlled by sellers to one controlled by buyers. In October 2015, the price per square foot was $593. Prior to 2016, buyers were competing for a much smaller pool of available homes. This competition drove home prices up. 2016 could be seen as the year sellers decided to step forward, and inventory has exceeded what we’ve been seeing for many years. Buyers are no longer pressured to bid up prices in order to capture a home, and prices have retracted to reflect the increased inventory.

If you are thinking about purchasing a home in Almaden Valley, contact me and let me show you how I can help make your dream home a reality. 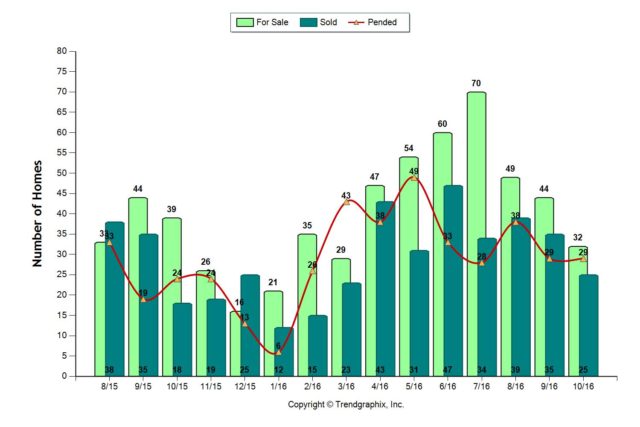