March 2017 Almaden Valley real estate market update… The Almaden Valley real estate market continues to heat up along with the temperature. The number of single family homes sold in March was up 8% from February (27 as compared to 25), while the number of homes under contract was up to 39 as compared to 27 over the same time frame – a whopping 44.4% increase! Sellers are starting to come back on the market as well – we saw an almost 21% increase in single family listings in March (29) as compared to February (24).

Comparing March 2017 to March 2016, we can see that the Almaden Valley real estate market continues to grow. The number of homes that sold in March 2017 (27) is up 17.4% from the number that sold the same time last year (23). The number of homes under contract did drop a bit last month – 39 in March 2017 vs. 43 in March 2016, for a 9.3% decrease – but this decrease could very well be due to the fact that inventory in February 2017 was down significantly from February 2016, while sold listings were dramatically higher this same time period. In other words, there simply weren’t enough homes to support the demand.

If you’re thinking about buying or selling a home, give me a call! 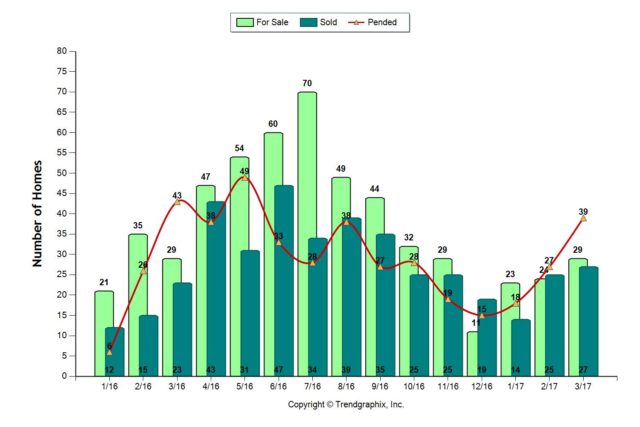